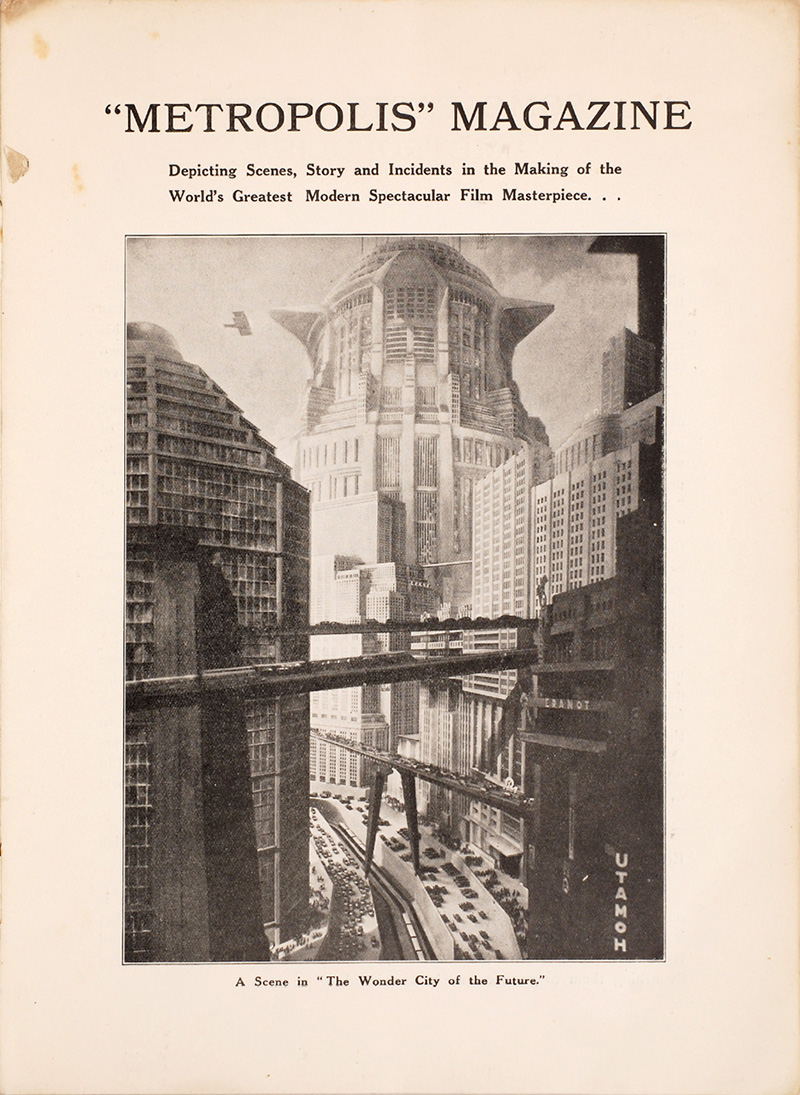 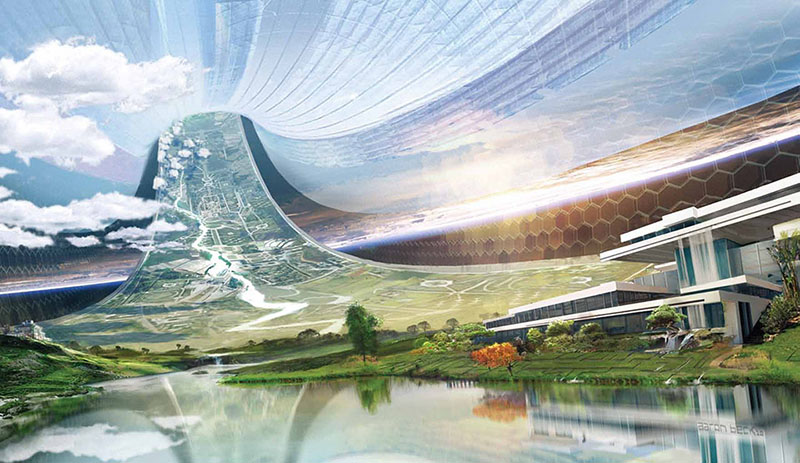 Figure 4
Drawing by Syd Mead, since the 1970’s active as a production and VFX designer, here a concept drawing for the movie Elysium, 2013. A peak inside the space station depicting the Stanford-Torus Design, expanding it with the artificial atmosphere of a Beverly Hills-like design. https://borg.com/2013/08/23/elysium-the-art-of-the-film-spotlights-work-of-weta-creators/, last accessed on 10.10.2019 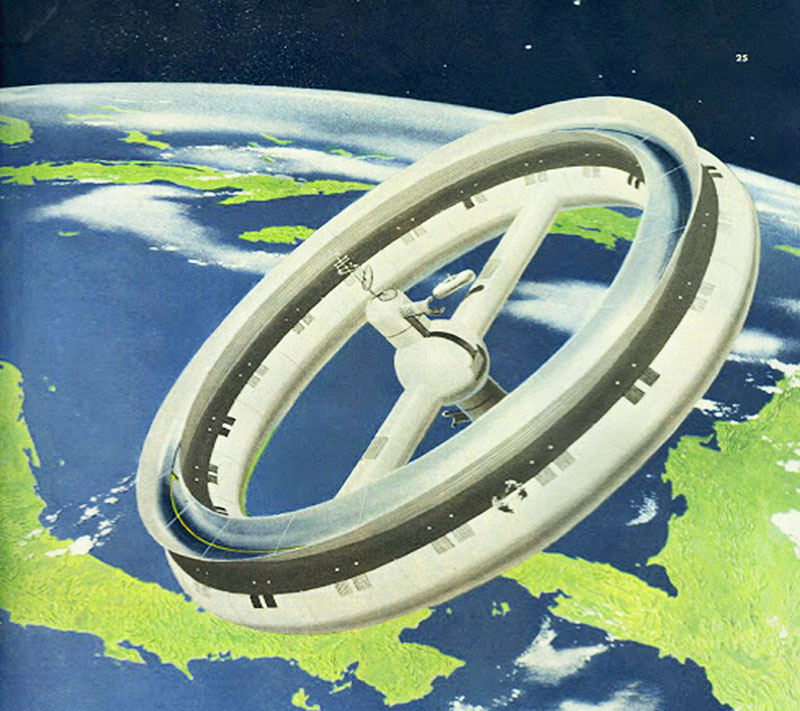 Figure 5
Drawing by Chesley Bonestell, condensing different concepts of space stations in detailed sequences for Collier’s Magazine in the 1950’s. He was also doing background space art for the movie industry, and was inspired by von Braun’s ideas. Colliers Magazine, 1952, https://www.centauri-dreams.org/2012/10/02/colliers-gorgeous-art-breathtaking-ideas/, last accessed on 10.10.2019

Science fiction nowadays functions foremost as a tool to visualise and build utopian ideas, to make them palpable and haptic. But can the genre still uphold a certain complexity in utopian concepts? Current technological possibilities have enabled the fabrication of architectural and social utopian imagery in a wide range of media. The visual often seems to be more important than the actual critique and questioning of societal contemporary concepts through imagery. By looking at examples in film of the science fiction genre, architectural and social settings are questioned for their validity in visualising utopian ideas.

Besides being a form of entertainment often repackaging old narratives into a futuristic or alternative world setting, science fiction can be used as a tool to reflect and represent socio-political systems, to envision possible or probable settings, their development and constraints; often connected to technological changes.

Fiction as a method therefore enables us to think about possibilities and changes of actual circumstances without challenging them in a scientific or economic context. It temporarily frees us from the constraints of truth and empirical verifiability.

The following text will focus on media which is capable of visualising ideas about utopia inside the genre of science fiction, for either active (interactive: games) or passive (movies) reception. Science fiction thus becomes a tool, a world building tool, which is presenting possibilities in reference to current societies, systems, their beliefs and visions.

But is science fiction still the appropriate genre to visualise utopian ideas? Does it still hold potential for looking further, to formulate new and visionary ideas, to question current developments without losing itself in superficial and generic imagery? Are science fiction movies and games mainly shows of superficial attributes with SFX and generic images of supposedly new or futuristic ideas and technologies?

The main question will be examined using examples of film (as opposed to literature or games), focusing on their imagery and its embedded ideas. Being part of a mass market industry this also contains unarticulated ideas about the development of society according to conservative or reactionary political worldviews pictured as technological progress.

If science fiction images are considered as a kind of vehicle to represent utopia, then one of the foremost formulations or embodiments of utopia can be seen in its depiction of architectural and urban settings. This also raises the question of how architecture is dealt with in the production of science fiction movies. The aspects of urban space, architecture and cinematic space are highly intertwined and create their own discourse on spatial techniques and scopes. This also allows to look at society as a cybernetic system, influencing the human being as part of the architectural construct, affected by its constellations.

It is important to mention that in science fiction a utopian concept is often expressed by depicting the dystopian, with the implication that the utopian idea as the visionary goal will be reached, when dystopia is overcome. The term utopia and dystopia will therefore almost be used synonymously.

As one of the most prominent examples for the intense correlation between architectural reality, and architectural theory as a background, and cinematic space, Metropolis (Fritz Lang, 1927, see figure 1) shows a set design and the “wonder city of the future”, as narrational element. The city in Metropolis is presented as a model and as an intertwined system, where it functions as a machine in which everyone and everything is part of the system. Their actions are controlled and the city’s functionality is based on the interplay of every element, human and machine.

The technology ruling and controlling the city is visible in the infrastructure and building material of the city and the organisation of its people. The city as a machine is a symbol for the constraints and inner workings of the society depicted. This new Babylon visualises the narration in architecture, movement and music, whilst telling a classical story of a divided society. Everything supports the existence of the proverbial 1% of society, represented locally in the upper city (where the rich live), in contrast to the sublevel of the city (where the workers live and the machinic workings are situated). So the dystopian setting with the oppression of workers and a prevalent machinery is feeding into the utopian setting of an upper class society. Dystopia supports utopia, makes it possible and palpable.

Oriented on styles and icons of the architecture of their times, movies and their imagery of utopian-dystopian future cities in a way established a foundation for later film productions and designs of in this case megalomaniac proportions and phenomena. And on the other hand feed into the narratives transporting further on of utopia and its depictions.

The second and rather current example, Elysium (2013) is connected with the poetics of the US film industry but also stemming from other cultural influences. Several aspects in Elysium (director Neill Blomkamp) show that science fiction can be used as a utopian tool, through its representations of architecture; thus making it a useful example here. The premise of the narration contains aspects of utopia as a segregated space, as contained space, as something neither entirely accessible nor for everyone. All of these aspects are often connected with how utopia is described. Furthermore the architectural space described in Elysium is a metaphor for the structure of society and the different classifications of society. One in space, which is situated high above the constraints of Earth and accessible to only a few and privileged in a gated space community (see Figure 2). The other is one huge never-ending city consisting of conglomerations of huts and favelas, with minimal infrastructure, poverty, decay, extreme working conditions and no health system. In this contrasting visualisation of society the architecture of Elysium, the space station in orbit, sticks out as an exemplary architectural construction, as a superlative in contrast to the sprawl on Earth. The huge luxury habitat as a floating space-home for half a million ultra-affluent citizens references the architecture of space station studies conducted by NASA in the summer study program at Stanford University in 1975; one of which is the design study known as ‘Island Two’, which would comfortably house 10,000 people (see Figure 3). Technical parameters of the construction include a wheel, 3 kilometres wide and 60 kilometres circumference, with an active air pressure system maintaining a recyclable atmosphere. For the stabilization of the rotating wheel a large mass of water ballast is used and the rotation itself generates a simulated gravity. Slight changes of the original study are the ‘open roof’ access of the inner wheel construction as to allow access for shuttles from outside (see Figure 4). Further influence was taken from the original drafts of Herman Potočnic (space visionary, 1894-1929) using one part of his concept known as ‘The Wohnrad’, the residential wheel (1929) and also of the wheel-structured space settlements envisioned by Wernher von Braun (and the Association for Space Navigation) in 1952 (see Figure 5). It should be mentioned that these drafts and imaginations of settlements in space switched several times back and forth between science fiction proposals and illustrations on one hand, and scientific studies and their discussions in technological contexts on the other; be they valid, visionary, feasible or not.

The concept of space stations is neither novel nor exclusively explored in science fiction context. As the concept of the habitat in Elysium is based on one of the hypothetical scientific studies made by NASA in the seventies, space stations in science fiction often use both existing and speculative technologies, fictitious and speculative buildings or urbanities, adapting them to the premises necessary for their narrations. The most viable options of space stations describe the concept of the rotating space wheel or equivalent constructions like rings and comets which enable the generation of an artificial gravity. Some examples and their science fictional visualizations are the Stanford Torus Design (1975) and other torus constructions as seen in the Ringworld (David Niven, 1970) or in Halo (1st-person-shooter, Sci-Fi game franchise, since 2001), cylinder constructions or the O’Neill Cylinder like in Mass Effect (Action RPG, The Citadel, ca. 2013), the Bernal Sphere like in Babylon 5 (J. Michael Straczynsky, 1993-98), the Dyson Sphere (after the original idea of Freeman Dyson, 1959) as in Star Trek: Enterprise (TNG 1992), gyroscopic systems, an Alderson disk, and so on.

Elysium’s director Neill Blomkamp uses an obvious iconic imagery and known visionary ideas as a credible and easily accessible premise. He turns it into a critique of current global problems, extrapolating them into a near future. The architectural construct in moon-orbit functions as the metaphor for the class disparities already existent. The luxurious world ring and its technology are used as an overdrawn projection of the current problems of world society. Evoking the celestial city and an enclosed garden of paradise, the near-Earth settlement and (with it the idealisation of) colonisation in space within Elysium, is set as stark contrast to the all-encompassing never-ending slum-city on Earth. The utopian place clashes with the dystopian extrapolation of contemporary socio-economic tendencies. The architectural setting provides a simple yet easily discernible metaphor for this clash.

Worldbuilding in contemporary science fiction is often implementing technological drafts of different eras without further reflection or scrutiny, resulting in adopting a certain mindset of blind faith in technological progress. Working with an imagery of eras in which there was a greater interest in technological feasibility, without asking for social and ecological consequences. In the example of Elysium, Blomkamp plays with these notions and relates them to actual social and economic settings. He uses the juxtaposition of reactionary imagery of the technologically advanced versus the dystopian display of an industrialized and exploited society in a critical and reflective manner.