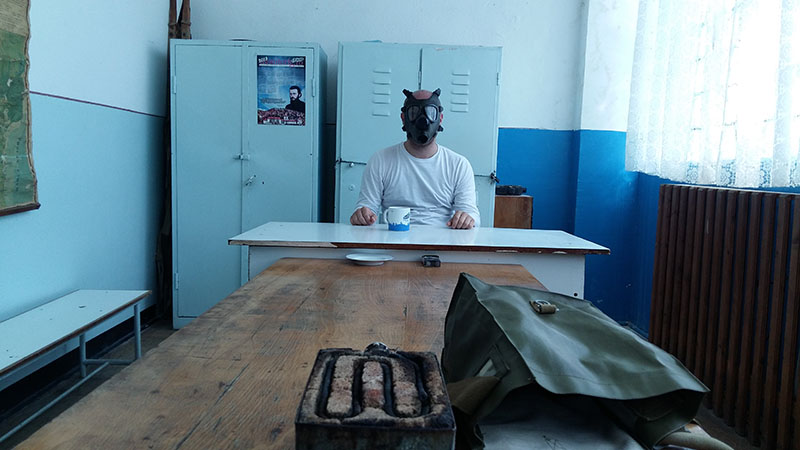 Utopia is a complex notion. It is an ideal place where the human’s desires will be realized and where there is no inertia or repetition. This article explores Michel Foucault’s approach to describe utopia in which he used the term “heterotopia”1. If the utopia is an idealistic and imaginary place, heterotopia is a physical representation or approximation of utopia. A parallel place that interrupts the normal, seemingly mundane continuity of everyday life, bringing together two incompatible situations in one place. This is a place different from other places and terminologically means “other place”. In explaining the characteristics of heterotopia, Foucault employs the metaphor of a mirror. A mirror is a utopia because the reflected image is a placeless place, an unreal virtual place that allows one to see one’s own visibility. However, the mirror is also a heterotopia, for that it is a real object. The heterotopia of the mirror is at once absolutely real, relating with the real space surrounding it, and absolutely unreal, creating a virtual image.

Foucault described heterotopias as temporal. In each era in history, there have been different heterotopias in different cultures. In recent centuries, fast-growing technology and metropolitan expansions yielded new kinds of heterotopias to emerge inside the cities. The cities and their inhabitants witnessed new problems caused by environmental and housing policies. This article argues that such problems are the results of modern human understanding of place and space. As today’s architecture and urban planning are the results of the implementation of such perspective to the technological instruments.

To understand it better we need to return to the concept of the place which is an old term and usually comes alongside the space. Plato argues the space as a determined and eternal being that the things are located in it. Aristotle, on the other hand, defines space as “topos” or place and considers it a component of the larger space whose range corresponds to the volume embraces that place. Plato’s definition of space received more attention in the course of history and became completed by the Newtonian definition of space and place during the Renaissance and shaped the concept of the three-dimensional absolute space which is temporal, and physical masses are emplaced within it.

Newton and later Kant and Hume considered space as three-dimensional with length, width and height, and place as the geometric coordination of a point with respect to that space. Modern science and technology suppose that space is an infinite grid, describing it with Euclidean geometry and the Cartesian coordinate system. By such a definition, space is reduced to three material dimensions and loses its other qualities; and the complex relationships in the world are defined in the form of mathematical relations. It means studying the world in an isolated environment. Isolated from qualitative and humanistic aspects. The result will be the production of abstract, simplified, standardized, concrete and binary spaces which have been designed so homogenous in that there are no preferences for the points. Man, with all his complexities is expected to live in an abstract simplified space represent on a paper. This may be applicable for an abstract entity but a plan which is constrained into two or three material dimensions is not sufficient to meet all needs of a natural being.

Abstraction helps human beings in translating and understanding the world complex notions. Numbers, poetry, painting, mathematics, and so on are all the courses of simplifying such notions. But can a house also be explained by numbers or by its latitude and longitude? It is the same weird as to charge a robot’s power with parental love and empathy. The inconsistency and incompatibility between humans and their living spaces have shaped the heterotopias of the modern age. Individuals have had to adapt themselves to these abstract spaces of planned cities with the divisions often based on political and economic decisions. David Harvey sees the housing policies as the result of capital accumulation transforming from its liquid to concrete form that causes mass alienation of the whole population from qualities of daily life in the urban environment and from their capacity to revolve2.

Martin Heidegger, Gaston Bachelard, Henri Lefebvre, Jeff Malpas, Norberg Schultz, and Marshall Berman, challenged the space and place interpretations as to be still, non-dialectical and inert. Henri Lefebvre criticizes modern urban planning and argues that planners attempt to map space dividing and problem-solving through simplifying calculations and thus fail to grasp the whole complex concept of the human spatiality3. He describes planned societies as a result of technology and modernity. The result of instruments, and the result of production as a repetitive action. On the other hand, from the view of a modernist architect or planner like Le Corbusier, it is the result of considering the human as a recurring existence with a set of psycho-physical axioms that can be listed and defined by elites. Today, analogous cities and residential complexes are built all over the world. Technological instruments help humans overcome climate conditions, flatten the hills, heap the valleys, warm up the cold air and cool the warm air. And modernity, devoid of any culture or custom, makes cities deprived of cultural, ethnic, and traditional elements.

The individuals, each one now as one of the billions who cannot be identified from the rest, have to build a personality of their own self. They have to be followers of the new norms of human colonies, and as a civilized human being they must perform an acceptable steady role by wearing the social masks which are not for special occasions or rituals anymore, but are now part of a daily routine manifested in non-places of everyday life.

In such circumstances, the concept of self-reflection has also changed. As in social mirror theory, people are not able to perceive their own reflection without having other people’s interpretations of their own experiences. Here the reflection is that of the social scale; self-cognition is rooted in social feedbacks. But the reflection of modern human is not a reflection of his real self. This causes profound feeling of self-alienation and lack of identity.

In this situation, those who are tired of their fabricated personalities seek to shelter in heterotopias where they can, even temporarily, withdraw their social masks. Indeed, heterotopias are places emplaced among many other places. Outside these places, individuals demonstrate another image of themselves which is not in accordance with the common norms of each society. In these places, they don’t struggle anymore to achieve the common definition of acceptable individuals or successful persons in that society.

If heterotopia is an approximation of imaginary utopia in the real world, then to realize utopia it makes sense if we try to extend these individual other places to all places. To do so, we need to change our understanding of place and space and subsequently of our built environment. Since utopia is a place where desire matters, then humans should be regarded as independent rather than recurring beings. And since the identity manifests itself in place, and not in non-place, the existence of place and an independent human being is intertwined. In this phenomenological approach to human-space relation, the solutions will be obviously qualitative solutions.