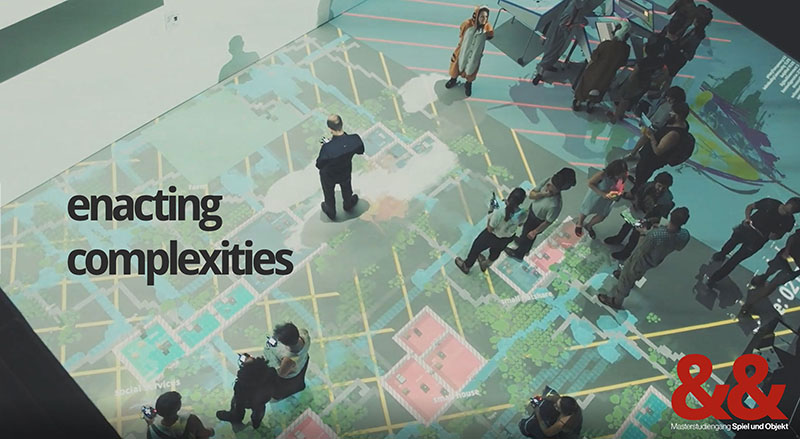 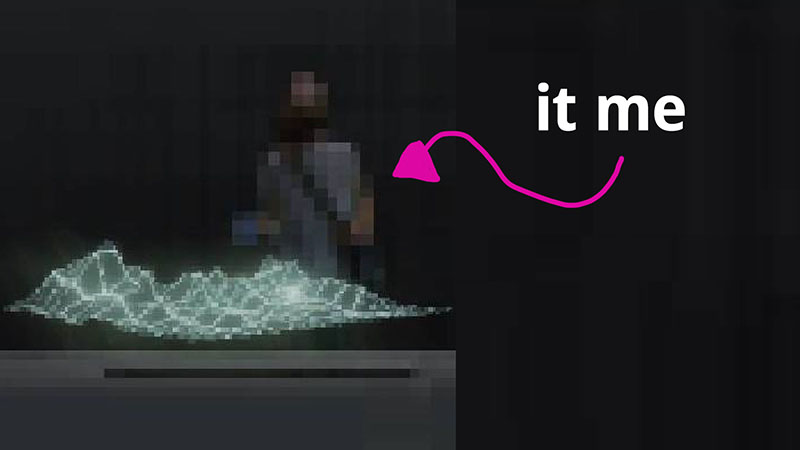 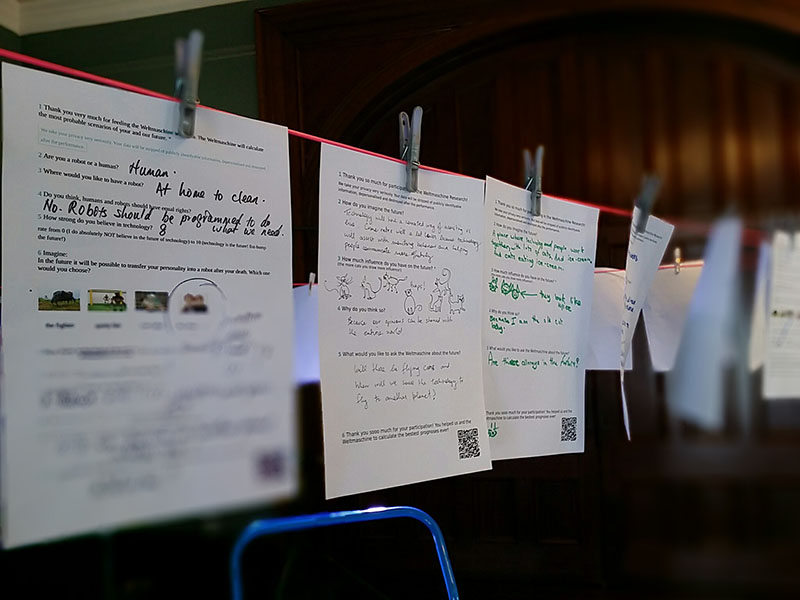 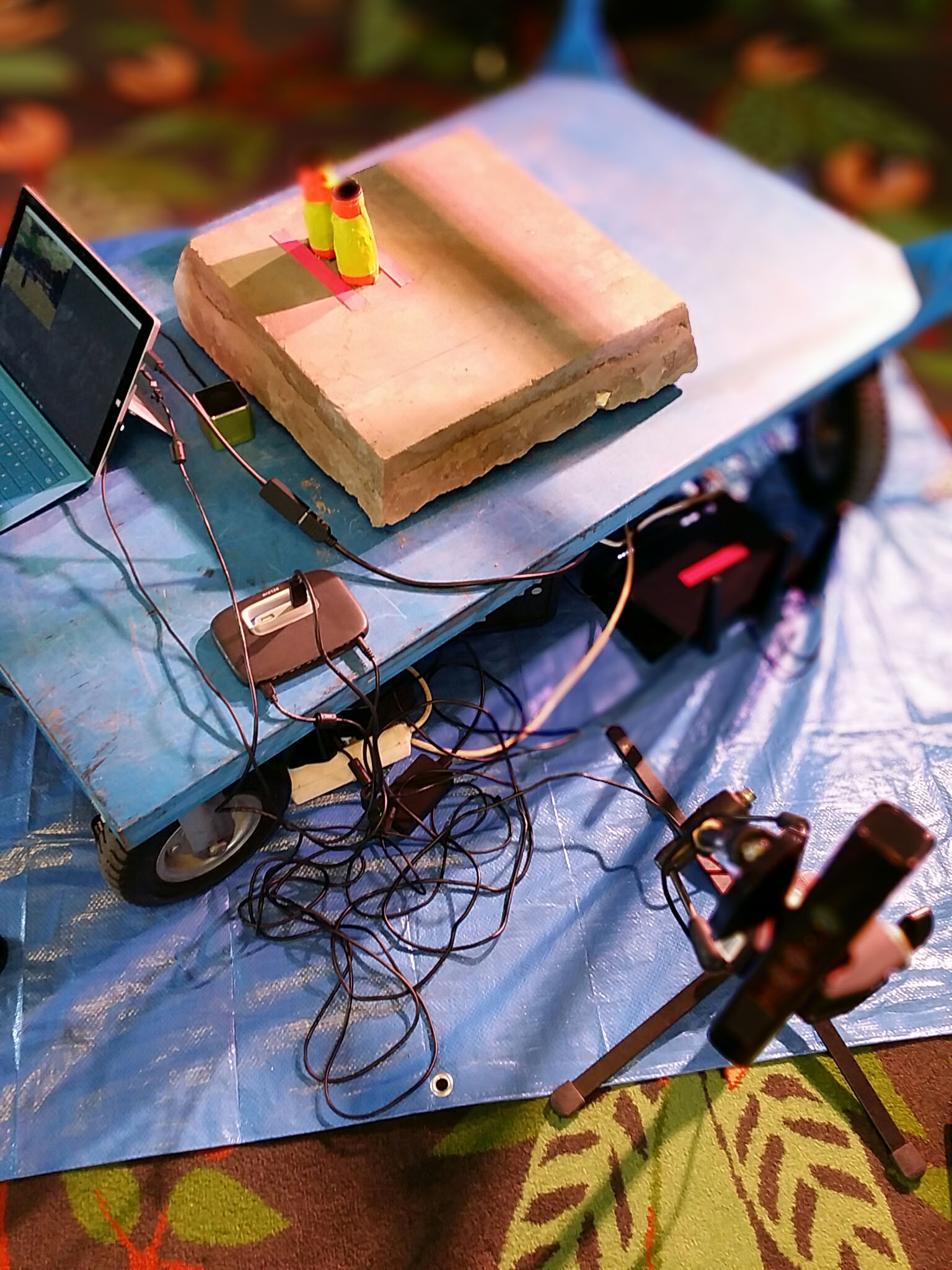 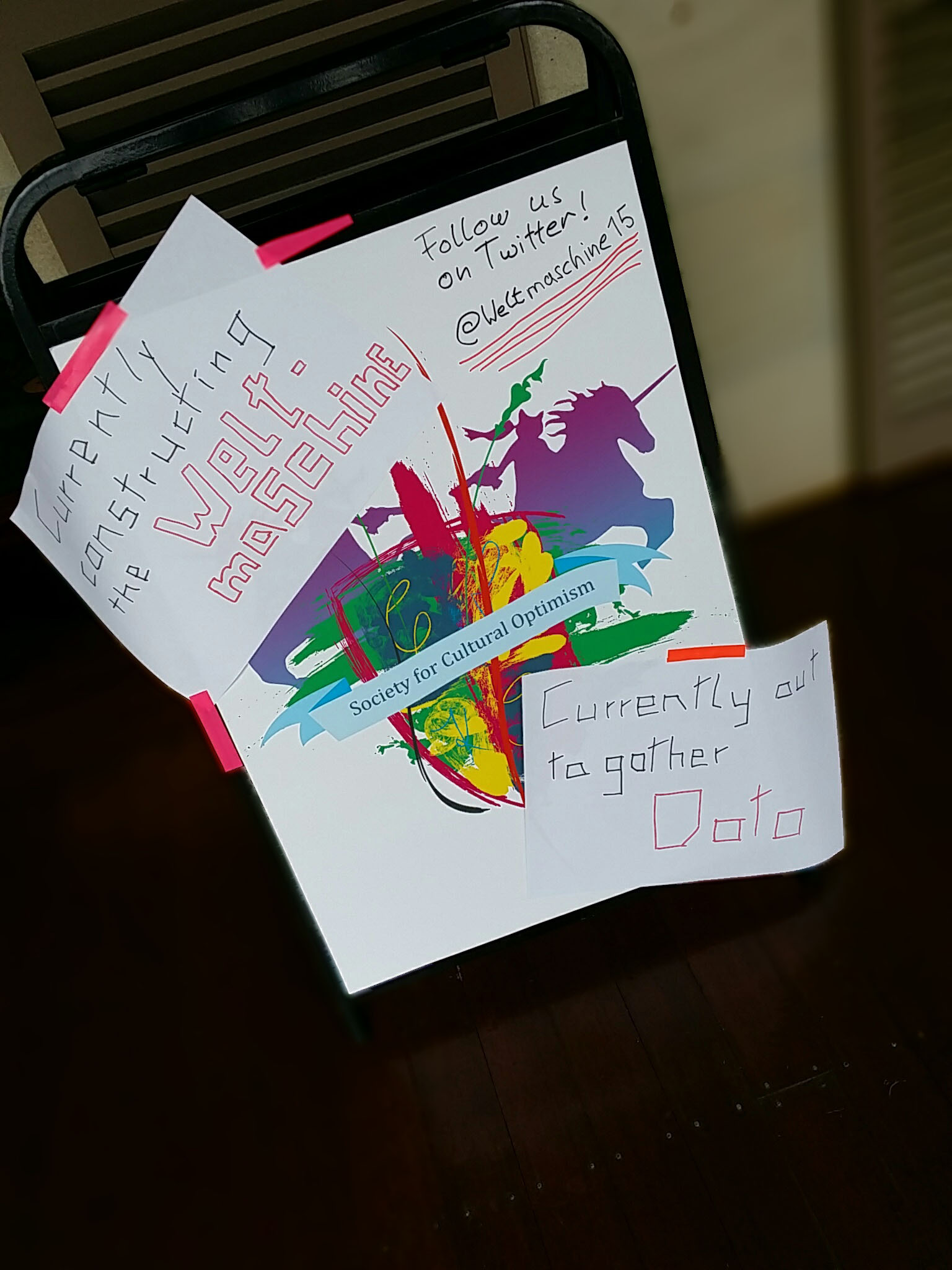 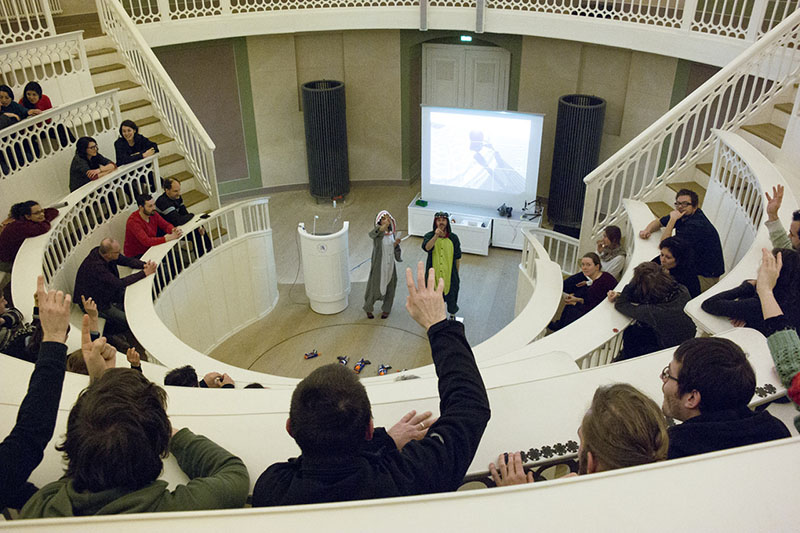 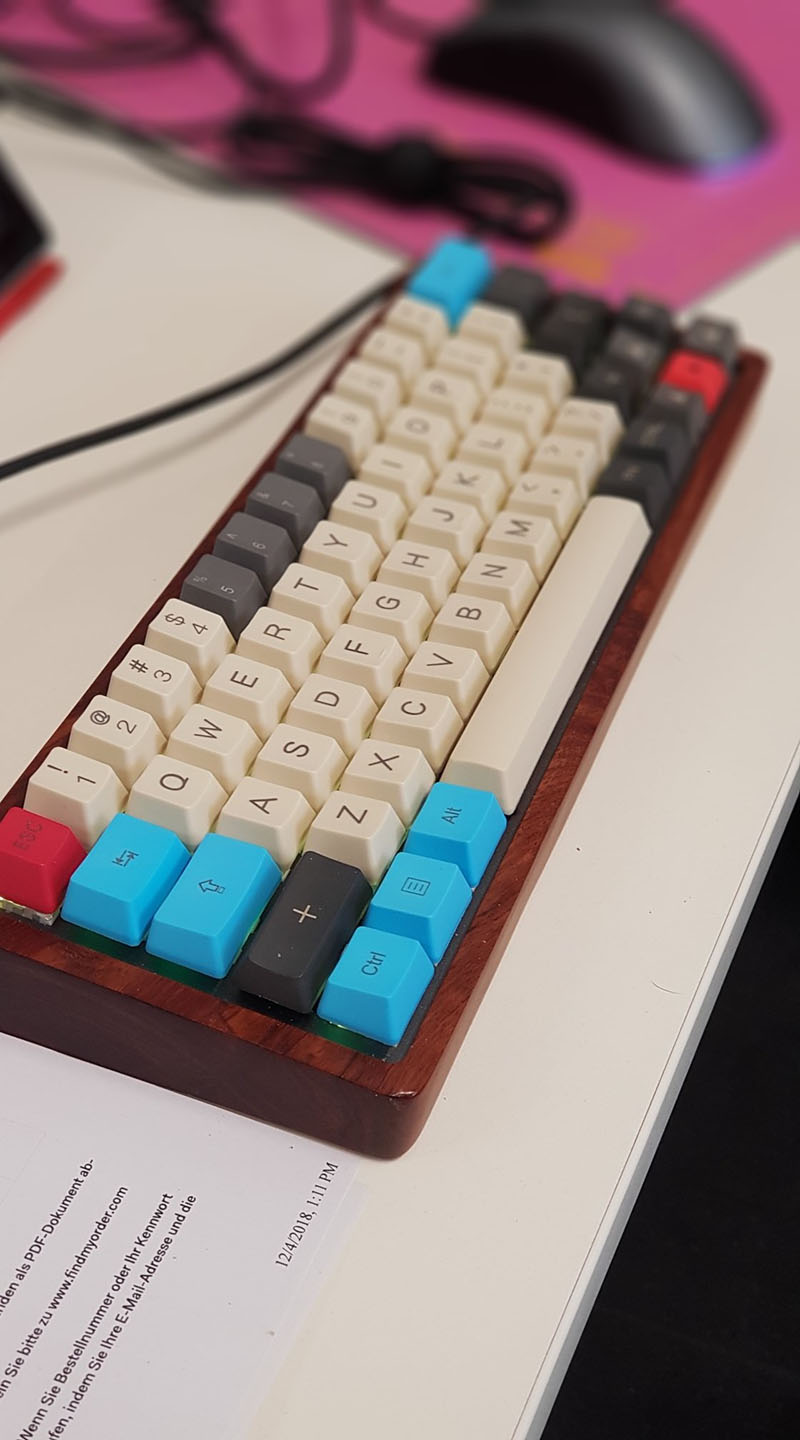 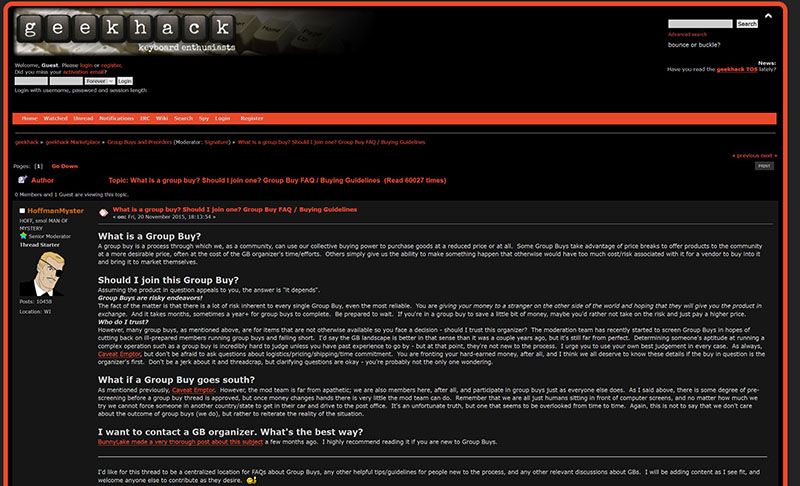 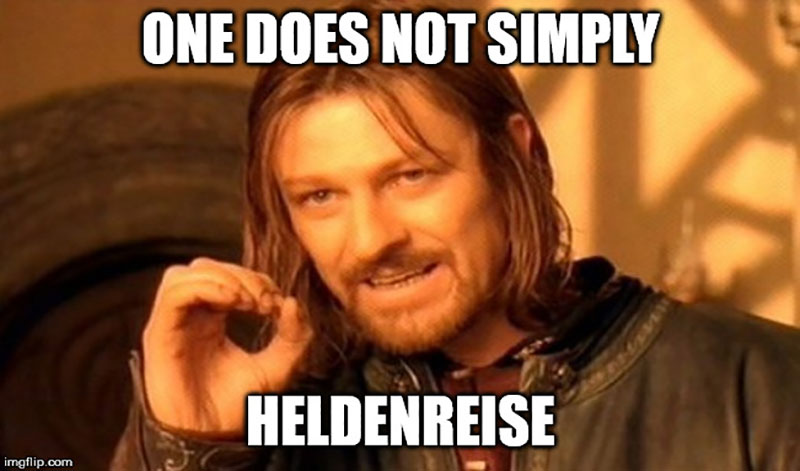 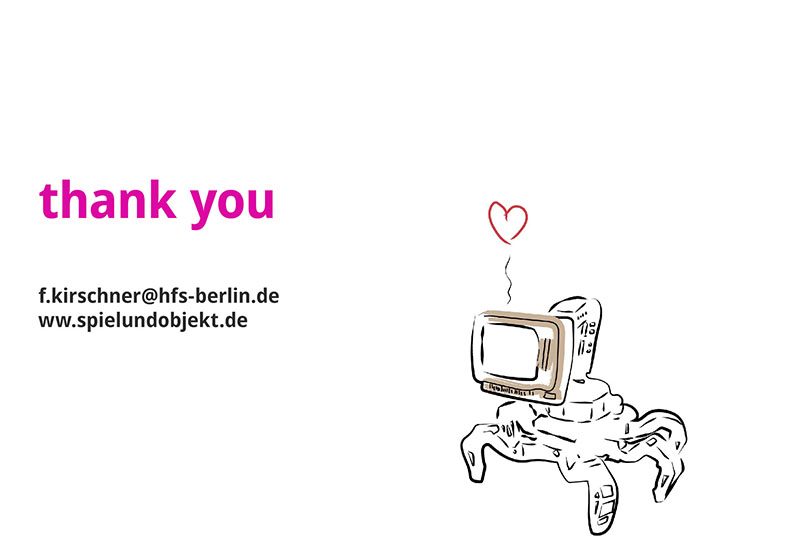 This pad text is synchronized as you type, so that everyone viewing this page sees the same text. Add __NOPUBLISH__ to prevent this pad from being archived.
Friedrich Kirschner “Situated drama aka enacting complexities”

The talk – about academic lenses inspired by humanities methods, such as ethnographic studies, social studies applied to the artistic practise

I don’t see the benefits by bringing two things together.

Lens implemented : own field of the world – complex
World is very complex (Donna Haraway – everything is connected with others)
Reference to Tincuta’s talk : cybernetics is an influence in his field of study, but does quite the opposite;
Interested in using these models, but cannot accept this crude representations / models of the world;
All life experience is counter cybernetics;
To counter feedback loops simplify representation ; rationalisation of the world.


“”posttraditionale Vergemeinschaftung”” <- can be approximative translated as “post – traditional communiti z ation”
Used to be a structure – you can be part or against it;

But structures will always be there;
Like churches, for example;
Or the way you dress…..
Reference to ? > kittler ? not sure / dramatology

How can we make art, in the world we live in ?


—– Another preambule
Question: how many people went to a German theater play?
Were you forced to go there?
Were you interested by yourself?

Own history: moved from the USA in the most Eastern German University to teach Digital media
Eastern German universities – in line with German theatre tradition,


Theater shaped by the idea of Bertold Brecht
“you shall always remember that a play is put on”
Don’t be emotional, because it’s a play
Don’t be funny at the same time
The school is shaped by this post-traditional philosophy
The play has 2 roles : the role on the script and the one you do yourself by working on the role
Another rule: just obey to the director’s idea

Then started a PhD
Born 2 hours from here
Know quite a lot about communism
Many ways to talk on something , different realities
Always negotiations between opposed reality
Navigating complex situations

*** name missing *** female version of Bruno Latour (teaching sociology  in Chicago)
Negotiation should include also objects and others than humans
We are shaped by knowledge objects,
Always situated and situative

A device, a machine called “Weltmaschine” (German engineering untranslatable, but it would be the “World machine” so so)
Concrete block
Presented as the only thing that can travel through time
Kinect+cables+box->lookin’ professional

<– what a group buys?
When one searches for stuff produced long ago
Forums help to organise efforts to produce mech keyboards in china
groupbuy.com
You can produce anything you want if you get enough people to want it
Institutionalized starting from  a discussion on a forum > becoming an economical model
Hack the production lines !!! small scale quantities productions integrated into a mass production system !

= connected to video games because vg needs mech keyboards
Steam store  largest place to buy videogames
*** gamer talk ***
Steamstore has a  break, because of summer sales * store.steampowered.com
Usually when big sales, there is a game
Butterfly effect ?
Former minister of finance in Greece – Yannis Varoufakis has a PhD in Game Theory🙂
Worked at steam (wow)

Internet meme : ONE DOES NOT SIMPLY … HELDENREISE …

— return of theatre image
Loop : hard to work in theater because theater is like this (conventional scene/room)

Meme image = crossroad rod panel, one way to storytelling, another way to complexity

Western culture myth of a story with only one ending
[disclaimer] Call of duty, horrible game (part of it recruit people by US Army singular narratives are mainstream->problem


Theater is a good place for new cultural productions
And negotiate with different people
Space for … cooking ?
Space for crazy things
People are not upset if someone beats one another on stage
Not calling the police
Cultural setting with bizarre things happening
No consequences like in real life because is theatre -> ok with crazy things happening -> Get people to make people do crazy shit
Make-believe has become harder

Representation of the society, invited to move, from country to country to suck out more and more resources from the lands
Archigram late sixties
The idea of walking city, inspired by cybernetics
Gloves, touch the performer to move society
Workers have to generate enough energy to move the society
Workers are paid, they go to the bar, etc.
No actors, just players( the audience)
No description of what a “worker” is, they were only tools given (soldering iron, cardboard…)
You have a role but you can do anything you want => people negotiate how they want to perform self chosen tasks
Rare moment worker + culture
Open a way for people to negotiate between themselves
How they want to perform their role
Culture people decided to become porn industry

<—– much happened like in reality, did he hear as a feedback…

// social psycho experiments but to train to extract from systems authority

Discussion on what it’s like to be a worker?
Automated worker Arduino plus servo motor
For sale of this automated worker the creator got paid 3 coins, one shift’s worth, was upset
What does it mean to automatize your work? Bring people to negotiate!
This is awesome!
He “makes believe” it was huh 🙂 but yeah that is truly is funky

Description :
Audience invited to give food and art to animals
Then to ask forgiveness for Anthropocene
Anna Vera Kelle & Leoni, shape and negotiate as agents
(“Schule” “Press” desks)
Resources are transferred to next generations of players
A 5 channel installation
By plugging in and out
Material mediated knowledge object (charged)
Actualizing our understanding of Mediterranean crisis of refugees !

Question: architect – Stefan Farâmiță
How would the work of the last video would be put in an architectural design context ?
Answer: by stepping away from academia logic, towards what humans are in reality, using playing
I believe : when people can lie then they can be truthful to themselves, can try things
Architects can be the best at playing citizens unhappy with architects
His talk highlights that :
Not one single thing happen emmerged, but many things, chaotic, many ideas
Very idea will be good and bad
Like a pharmakon / poison or medicament
Its about negotiations, not outcome.
– cool answer

Question: How are the roles assigned? Randomly ? Fictional ?
Start form 0? Is there a set of instructions?
Does it have to do something with my current situation?
Answer: importance for him that people have “”some sort of choice””
People need a choice.
Persuasion, ask questions to change perception
Who wants to have a normal life? Instead of who wants to be a worker?
That’s why its theater not science!
The play aspect is most important <3
[disclaimer] we are not therapists
Playfulness of the situation is established

Question:
Latour, human and non-humans, assemblages
Methods of controverse:
1. Do you use controverse?
2. (reading) about negotiation, harmonies, resonance, Hartmund Rosa -> also used ?
Answer:
Resonance would be interesting to apply to this work yes, thinking about it
Latour… yes and no, love and hate, (Comment: What, Stengers !)
Find people with various backgrounds,
Reference : Karin Knorr Cetina

Question (Tincuta): Do you collect those situated situations?
Answer: Amazing question, ask the students
A story about rumours in a theater play. Uh.. Uh
65 persons decides of a setting in a bar, but 3 are not part, have to understand after how Things are set
People argue
Things are so complex to not been able to be documented
But there’s a press core…

Question: Milgram experiment? Old psychological situation to improve authority
Answer: There is a tape on Milgram instruction on how to play
Yes, there is a link
Definitely.
Do we do it reverse? or do we do the same?
Situation change, situations not reproducible
Therefore non reproducible data were obtained
Latour makes the analogy of science as theater setting

Question: not a question / but a comment
There are no borders, reality play, more than stage play
How important is the real time?
Answer: I want to have one-two beers with you <3
We know who to ask for a 3 beer
turn- beer- based
Importance of rythm
Brechtian
Machinex? immersive theater when they have a bar, talk to the audience as friends
Where meta- discussion can happen.