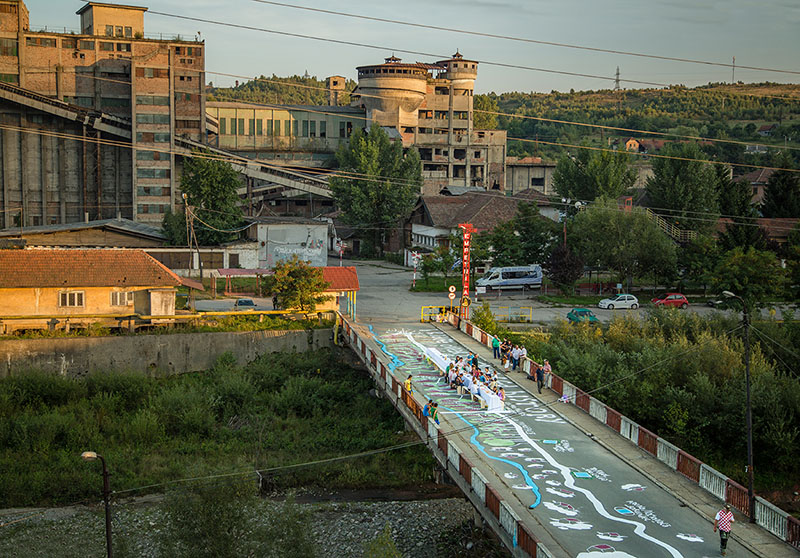 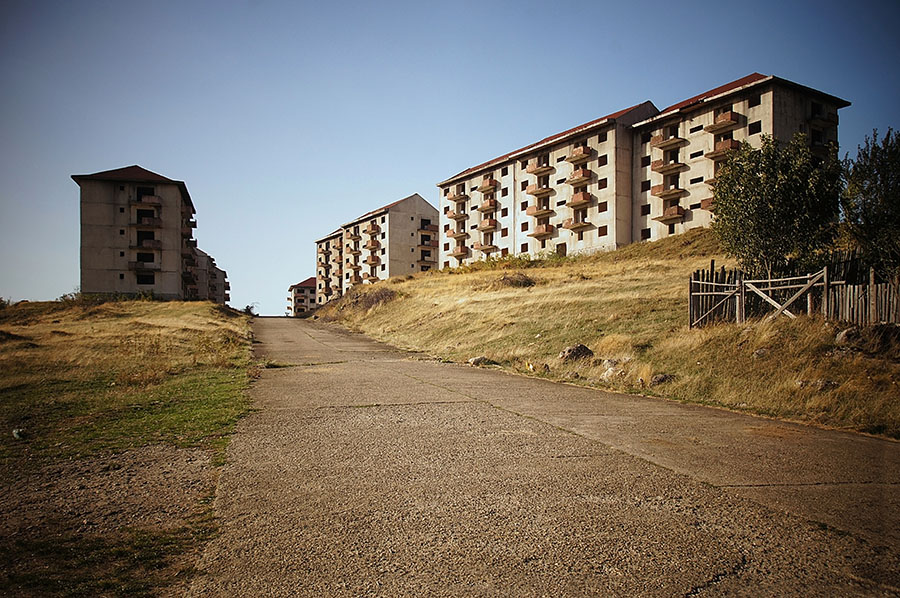 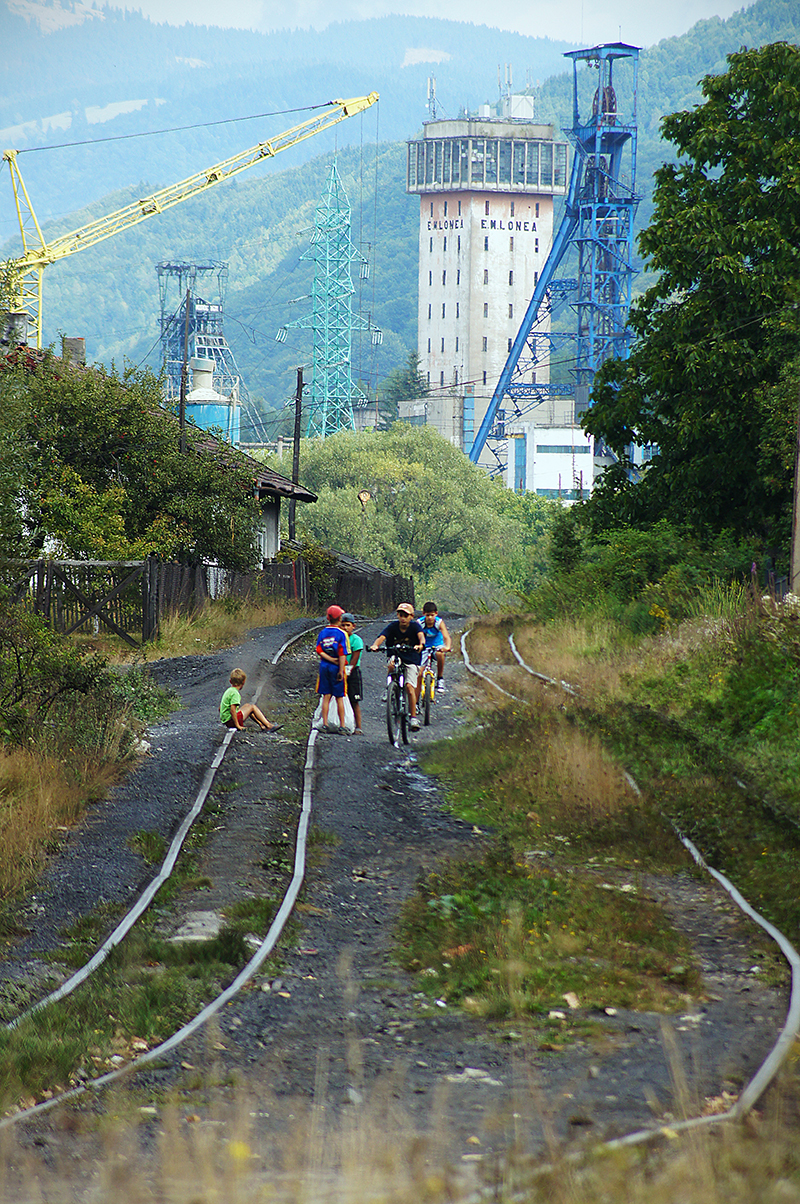 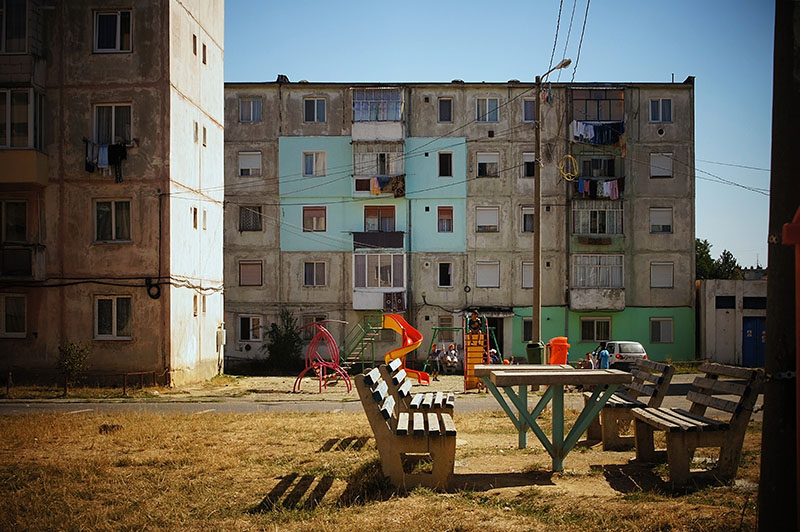 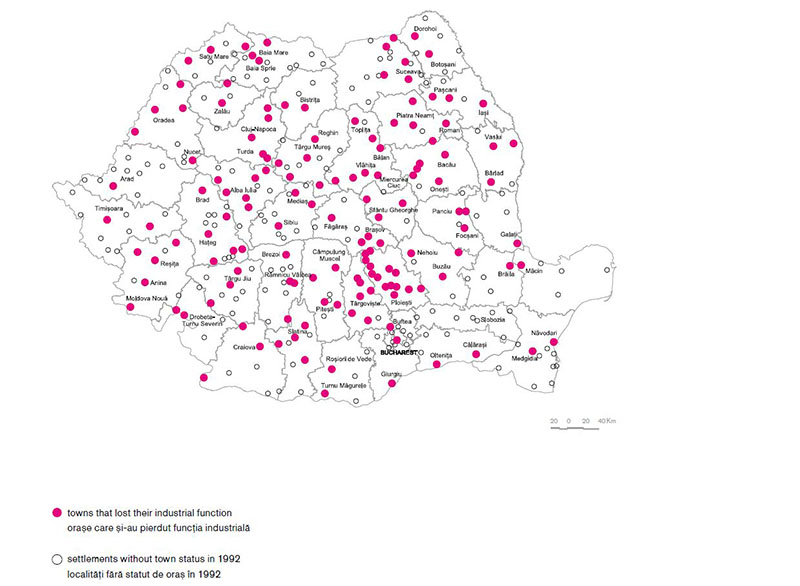 Shrinkage is the result of a complex interplay of factors. As such, it describes a phenomenon that
produces both quantitative and qualitative changes at the city or neighbourhood scale. It includes the
following aspects:

The Shrinking Cities in Romania project, conceived by architect and curator Ilinca Păun Constantinescu, took shape after research that began more than ten years ago. Statistical data shows that most Romanian cities, of different sizes and types (small touristic towns, industrial, agricultural towns, harbours by the Danube) are facing various forms of decline: socio-cultural, economic, physical, demographic. Half of the country’s cities currently have 20% fewer residents than in the 1990s. This phenomenon is insufficiently discussed, although more than a decade has passed since it was first theorised by German researchers.
Gathering a large group of academics, researchers, artists, architects, urban planners and hosting several recurring events, Shrinking Cities in Romania is a pioneering initiative to raise awareness about an acute and pervasive, yet too little discussed matter, aiming to create a positive perspective on a negative phenomenon. Shrinkage can be a vector for modernization and innovation, re-use, alternative resources, artistic creation, and revaluation of interpersonal relationships.

In terms of urbanisation, understood as the concentration of population in cities, the communist period was characterized by growth, while the post-communist one by decline. One could interpret the current crisis of Romanian cities as an extended process of reinvention, of self-organisation in the long term, as a natural reaction to the constraints of a centralised system. Many studies have approached the city as a living organism; like the body, the city goes from birth through maturity toward stability or demise.

In contrast to the surge of urbanization of the previous decades, the towns artificially created in the 2000s, along with the paradoxical stasis of the share of urban population over the past thirty years, are clear evidence of the decline of urbanisation rates and of a series of problems with the urban network. Urban planners and geographers have pointed out several issues with the territorial distribution of cities. In addition to the relatively low urbanisation rate (around 50% today), cities and towns are unevenly distributed throughout the country, resulting in weak polarization. Further, there are areas with not one town or city within a thirty-kilometre radius or more, there is no real competition among cities, and vacant areas around large cities continue to expand.
The most vulnerable elements in the urban network are small towns. While large cities are relatively stable and provide both diversity and opportunities and most mid-sized cities have successfully adapted to the profound transformations of the communist era, the basis of the urban pyramid is the one most affected by shrinkage. Among the industrial towns (1), mining towns form a category of their own (Baia Sprie, Anina, Bălan, Brad, Cavnic, Motru, Rovinari, Moldova Nouă, Țicleni, and the towns in the Jiu Valley). As a result of regional policies and the absence of genuine strategies of diversification, the areas that relied on a single industry, such as Victoria, were deeply affected by economic restructuring, and the massive unemployment and poverty that ensued. But industrial towns that are very different in terms of profile (metallurgy, coal mining, chemical), size (small, >20,000 residents, medium-small, medium-big), history (established in the Middle Ages, early twentieth century, during the Soviet-style socialist era or during the period of centralised economy) face similar problems. Declining or abandoned areas quickly appeared here, a process often enhanced by poor, uneven infrastructure, leading to high contrasts between regions. Most of the industrial sites were abandoned shortly after the Revolution, with no intention to repurpose or rehabilitate them. Reluctant to invest in cleaning up and converting old industrial brownfields, developers preferred to build on land already connected to the transport network. These actions had a huge impact, not only on the economy, but also on the society, on the people. In addition to the lack of job opportunities and widespread poverty, the sterile social life is one of the main causes of migration and urban shrinkage.
The former industrial towns represent indeed the majority of Romanian shrinking cities, but they are not the only ones in a state of decline. Another category consists of small tourist towns (2) whose facilities—some of them architectural heritage—are temporarily or permanently abandoned (e.g., Băile Herculane, Borsec, Solca, Băile Govora, Techirghiol, and Căciulata).Given that these towns have preserved a positive image, revitalization appears to be the obvious solution here, but it depends on administrative and economic decisions that, more often than not, are hindered by disputes over ownership. So, in spite of an obvious potential for regeneration, the towns in this category remain vulnerable. A third group is represented by declining Danube port towns (3), such as Sulina, Corabia, Turnu Măgurele, Zimnicea. They are indeed some of the most interesting small or medium-small Romanian towns due to their unique urban layouts designed in the nineteenth century, their position within the country, both peripheral and open, and the similar deeply rural surrounding areas. Unfortunately, the strongest potential driver of growth, the Danube, does not currently play a significant role in their urban life. Another category strongly affected by shrinkage are agrarian towns (4), former villages or communes built around agricultural production, which did not have a chance to develop an urban identity, e.g., Isaccea, Vânju Mare, Berești, Darabani, Babadag, Curtici. Usually situated in the lowland areas, these towns are too far away from major cities and to a large extent disconnected from infrastructure. Hastily developed in the last decade of communist rule, they are characterized by forms of urban dwelling artificially implanted in a rural setting and small industrial areas on the peripheries.
The ruralisation of the urban is yet another characteristic of small towns worth examining1. This can be either a manifestation of continuity, in that the rural character was never lost, or a consequence of poverty, a state of regression. Therefore, ruralisation is to be understood here, on the one hand, as a return to farming activities and, on the other hand, as a consequence of reverse migration, i.e., ‘young retirees and recent workforce in the 1990s2 and the workers laid off in the 2000s turn to agriculture as a means of subsistence.
Another recurring observation from the case studies under analysis is the gradual demise of urban attributes—from the closure or fragmentation of cultural or public commercial facilities, such as Houses of Culture, cinemas, “commercial complexes”, or department store buildings, replaced by small temporary businesses or corner shops, which are more dynamic and easily managed, to extreme poverty cases where the residents give up basic urban utilities, such as central heating, water supply, because the costs are too high in relation to their incomes. At the other end of the spectrum, the ruralisation trend can be a virtue translated into a deliberate life choice, and not an expression of backwardness. Reactivating traditional lifestyles, while integrating modern comforts, is after all one of the major preoccupations of contemporary architecture. Perhaps some of these towns with problematic identities and weak urban features, characterised by a strong tendency toward ruralisation, should be encouraged to transform so as to stay true to their main features, i.e., to become a type of city where modern comforts do not translate into an ill-fitting urban attribute. There are also small towns with urban features that are an untapped potential. Their identities could be easily reactivated or reinvented. In any case, the future of these places must be planned as part of the whole system; there can be no development scenario in isolation given that small towns are functionally dependent on the larger ones.

What is to be done then? Indeed, whatever analytical lens one might use, the situation of Romanian cities, particularly small and mid-sized ones, is a matter of concern; but that challenge even makes it more exciting. As history has shown repeatedly, a crisis situation can be turned into an opportunity for improvement. Temporary uses, cultural forms of protest, participatory architectural or landscape micro-projects can be solutions to the Romanian urban crisis. The first step is to use the vacant spaces, and from there, gradually build a broader vision and strategy.
Since the phenomenon of urban shrinkage still needs to be acknowledged in Romania, the current situation is characterised by small-scale bottom-up actions and not by a national-level strategy. But even worse is that local authorities often misconstrue the scale of the decline and the very notion of community. Hence, one could distinguish the following four attitudes toward urban decline:(1) ignoring it altogether; (2) acknowledging it without accepting it; (3) some degree of acceptance but no public discussion; (4) acceptance and action, i.e., taking the necessary steps to address this situation and overcome the negative consequences. Local administrations in Romania generally fall in the first or the second category, but the public perception is dominated by ignorance.
After all, urban shrinkage can be a source of creativity, a driver of modernisation and innovation, of repurposing and embracing alternative resources, of reassessing human relationships. “Direct participation is essential to planning,” researchers of urban shrinkage like Wiechmann, Rink or Haase claim. But such an approach requires a genuine preoccupation from the local decision-makers to understand social life and actual problems by encouraging citizen involvement in governance processes and social economy, in the co-production of public services.
Further, meaningful, sustainable change can only come from within these communities, and not from directives sent down from far away at the top where real knowledge of the problem lacks altogether. The starting point for shrinking cities should be to focus on improving the quality of life using locally available resources and a practical approach to identify and enhance the positive features of underdeveloped, peripheral areas and to implement high visibility micro-projects easily accessible for their residents. The city of the future might be smaller, but it is up to us to make it much better.